The Immerse Platform supports multiple VR and browser users together in the same environment. From a debugging perspective, this can add an extra level of complexity, as scenes must be rigorously tested to ensure synchronisation occurs for all users. Compared to 'conventional' approaches, multi-user testing with real users requires a lot of time and coordination of real testers to perform efficiently.

To help simplify this process, the Immerse SDK provides a feature for emulating other users online, by playing back a recording of a user's actions. The avatar recording feature allows a developer to record a VR avatar's movements (with controller inputs) and save this to a file. Currently this feature is used in Playmode tests; offline tests for a scene running in the Unity Editor.

For each "emulated" user, a scene must be launched locally in a special mode; this scene will have no access to the VR hardware. Scenes are launched as separate processes on a developer's PC. Each of these will represent a unique user in the session.

When the Build starts up, a dialog will be displayed stating that VR hardware cannot be found. This is as expected, as conflicts with the Unity Editor must be avoided. Once the recording has started playing, this dialog will disappear. 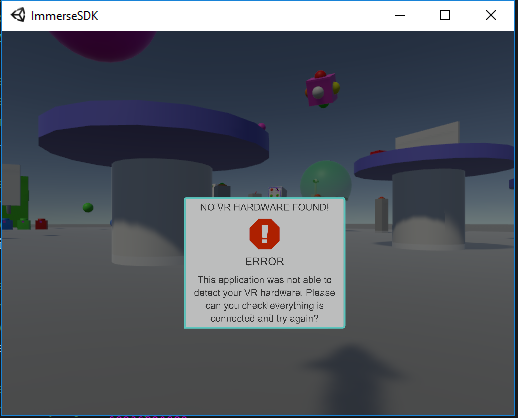